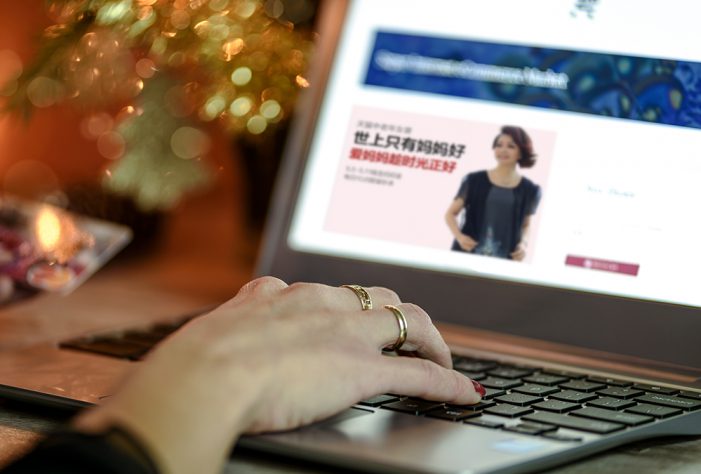 Doreen Caputo had just finished playing radio bingo Saturday night and turned on her laptop computer to see if a favorite Christmas sweatshirt had dropped in price, when she suddenly noticed some strange spider-like lettering along the left side of her favorite shopping page.

“At first I thought it was just a mistake, but then I realized they were some kind of Chinese letters” said Ms. Caputo. She immediately called the phone number listed under the “contact us” tab to ask why there were Chinese letters on the site and reached a call center in Hyderabad, India.

When told that the characters were likely part of an ad that had been inadvertently sent to her instead of one of the 3 million Chinese speakers in the United States, Ms. Caputo was visibly irritated.  “I don’t understand why they have to have those sorts of ads in America. They should just be in China. Why can’t our government stop these ads electronically at the border? I mean, if we can put a man on mars, then we should be able to police our own websites”.

After viewing the characters suspiciously for a minute, Ms. Caputo called for her short hair cat, Tompkins, and pulled her up onto her lap. She held the cat’s paws wordlessly as she sat looking out the window of her second floor apartment onto the parking lot of the Deerwood Heights Condominiums.

A pale moon rose over the roof of the Aberdeen strip mall in the distance. There was a rustling in the trees as a cold wind knifed past the sodium vapor lights. A Pontiac sedan made a creaking sound as a lonesome dog barked three times. The laptop computer hard drive whirred in the background for a moment, then fell silent.