By Bureau Correspondent on December 6, 2017Comments Off on Flat Earth Society To Battle Fake Moon Landers In Fight To The Death 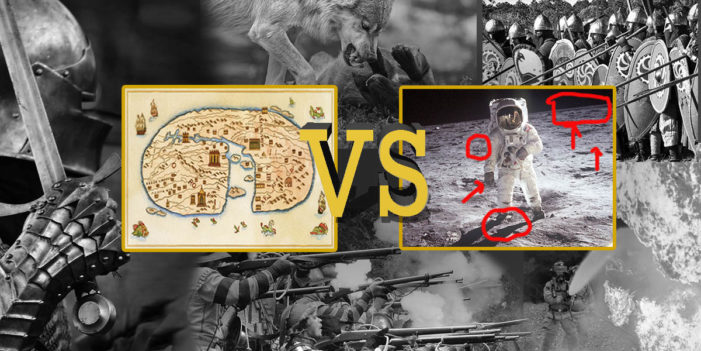 In a final showdown to determine who will claim the mantle of Keepers of the Ultimate Truth, the forces of the Flat Earth Society, and believers that the US moon landing was a fake, will face off against each other in an epic war over the fate of the cosmos.

“We have dreaded this day for many years,” said Fren Wu, Professor Emeritus at The Truth University of Oxford Christs Church, “but diplomacy has failed and unfortunately, this is the only way forward.”

As foretold, the contestants will take the field on the plains of Valhalla, New Mexico, at a time mutually agreeable to each camp, and will engage each other in what will surely be a horrific scene of carnage not seen for millennia.

Survivors of that conflict, of which there are expected to be few, will be brought to the hills of Har-Meggido outside of Reno, where they will wage a climactic final battle to the death.

Lizard-People Theorists, Supply-Side Economists, Elvis Death Denialists, Obama Birthers, and assorted Knights Templar have been enlisted to bear away the dead as they fall, and to inscribe their names on the Tablets of Immortal Knowledge.

Each Side Confident They Will Prevail

Proponents of the fake moon landings mocked the flat earth theory as “a ludicrous reading of an easily verifiable set of facts,” pointing out that many people have flown around the world in an airplane. While the Flat Earth Society, for their part, called the fake moon landers “absurd crackpots” preoccupied with grainy video and ignorant of the outside world, which, as anyone can see, is plainly flat.

As expected, Grand Master Trump will preside over the conflict from his chamber of darkness concealed by a web of mists that is impenetrable to any mortal. He will view the spectacle on HBO pay-per-view until battles end, whereupon he will issue a Tweet proclaiming the loser as the victor.