By Bureau Correspondent on July 17, 2018Comments Off on Local Toad Depressed, Feeling Out-Toaded By President Lately 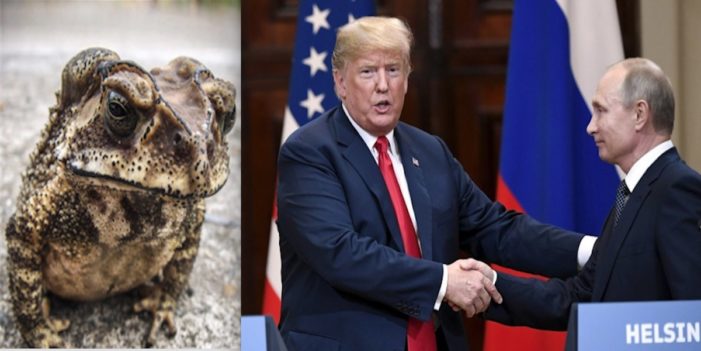 A local toad, who has made a name for himself as the ‘toadiest toad in Katchataw county’, has been feeling a little out of sorts during the president’s trip to Helsinki this week.

It seems he’s been plagued by the notion that maybe he’s quite not as toady as he thought.

“I always thought that being an actual toad gave me a ‘leg-up’ on the competition in terms of being toady”, said the toad. “You know, you can’t be much more of a toad than a real toad – but lately, I don’t know. I’m starting to have my doubts.”

“I catch a lot of flies all day. But is that what makes me a toad? Or swimming around in a pond full of lily pads? How about having dry, bumpy skin?”

“Maybe there’s a lot more to being truly toady than meets the eye,” said the toad wistfully.

“When I think of being toady, I think of toad,” said a dragonfly who lives nearby. “But I guess if you asked me who is the toadiest toad – I mean, THE all time toadiest toad ever – I suppose our president would have to be up there.”

“When you ignore the indictment of 12 Russian operatives for interfering in a US election and say that the Russian president is a ‘good competitor, and that is a compliment’ – well, that’s pretty toady,” the dragonfly observed.

“And when you say that the Russian president ‘has done an amazing job,’ ‘is really very much of a leader,’ and ‘he’s done a really great job outsmarting our country’… well, that’s kind of the definition of toady.

But despite the opinions of others in the swamp, toad is still going about his business of being the toadiest toad he can be.

“Look, I’ll never have the opportunity to be President of the United States, regardless of what I may think is right. Because, well look at me, I’m living in a swamp.”

“But what I can do is get up every morning, and be the best toad I know how to be. And if that’s not toady enough for the rest of the world, well, I’m OK with that.”

And with that, toad took a deep breath and puffed himself up to twice his normal size.

Because that’s just what real toads do.