South Dakota Man Burned By Yet Another Russian Spy Babe

By Bureau Correspondent on July 19, 2018Comments Off on South Dakota Man Burned By Yet Another Russian Spy Babe 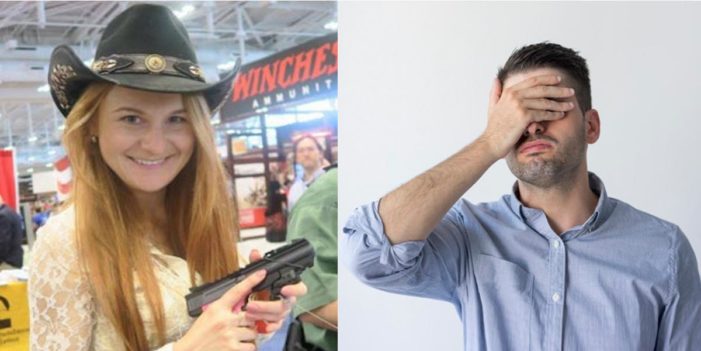 In the latest of a long line of personal relationships that have not worked out, South Dakota resident Steven Willbest was fooled once again by an international spy posing as a girlfriend who really cared about him.

“Jeez, you’d think I would have learned by now,” he said, nursing a beer at the El Durango sports bar outside the town of Durbin. “When a beautiful girl with a Russian accent asks you for directions to a local military installation over drinks, run the other way.”

Should Have Seen It Coming

“I don’t know what it is – one minute we’re playing Assassin’s Creed on the couch and she’s laughing and having a great time, and the next thing I know the Secret Service is going thru the glove compartment in my car while I’m face down handcuffed to a pole outside a Dairy Queen.”

“Why does dating have to be so complicated?”

Although the relationship ended abruptly after a sting operation by federal authorities, Mr. Willbest thought it was really developing into something special this time.

“Was it a little strange that she only wanted to talk on encrypted messaging platforms? Yeah. Did she come and go at strange hours and sometimes get into black limousines with tinted windows? Yeah. Did her bald uncle from Slovenia carrying a black briefcase and wearing sunglasses look like a visiting adjunct professor who was teaching a course on Russian fashion at the local community college? No.”

“But when a girl is that hot, I guess you just learn to overlook a couple things,” he shrugged.

In a sign he was finally turning the corner in his relationships, Mr. Willbest said he has sworn off hot-looking girls with foreign accents who carry small guns in their handbags and are occasionally picked up by helicopters.

“Last week I ran into this really friendly girl at a funny bar in Rapid City. She was done up in a lot of makeup, really glamorous, and said her name was Lady Chantalle.”

“She kept asking if I was into explorations, so I guess she’s into the outdoors,” he said. “Her voice is kind of deep, so that might take some getting use to, but I have a really good feeling about this one.”

“At least, she is who she says she is,” Mr. Willbest said hopefully, “which is all I really care about at this point.”