By Bureau Correspondent on August 9, 2018Comments Off on Info Wars App Actually A Way For Hillary To Monitor Your Movements 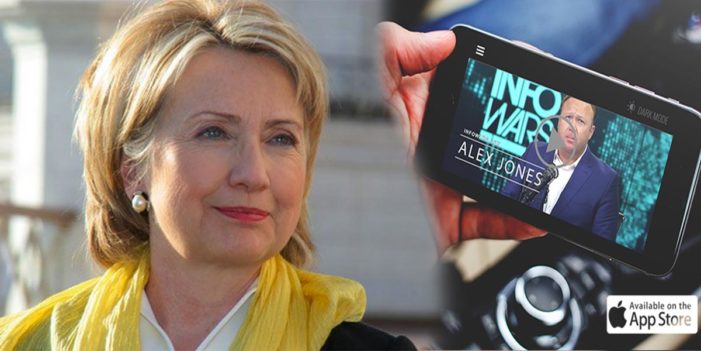 In a bewildering web of conspiracies that even Alex Jones is having trouble coming to grips with, the application to deliver the content of his show, Info Wars, has in fact turned out to be software that allows former Secretary of State Hillary Clinton to observe and record the movements of every single one of Info Wars’ millions of fans.

“Yep, get rid of the app immediately,” said the erstwhile public-access television host Mr. Jones, who was recently banned from several social media platforms. “It’s totally a front for Hillary Clinton to spy on you. Turns out she was behind the whole thing all along. Delete it as fast as you can.”

Staring Us Right In The Face

Frustrated that even he did not connect the dots that now seem so obvious, Mr. Jones implored his listeners to wake up to the fact that Hillary was tracking their movements, and likely could see what they’re doing right now.

“Obviously the extreme popularity of the app was an immediate red flag. The fact that it was SO off the charts successful tells you right away that something isn’t right.”

“Then, I started looking into the people that created the app and was shocked to discover that all of them had DEEP ties to Silicon Valley companies. It was like a who’s who list of globalist enablers. Red flag number two.”

“But the clincher was the fact that Hillary herself has made no mention whatsoever about it. It’s like she’s pretending the app doesn’t even exist – which is EXACTLY what she did with Pizzagate. When I realized that, I knew the whole thing had been compromised.”

Probably Can See You On The Toilet

Although repeatedly assured by the developers that Hillary Clinton could not access the GPS coordinates of a user, let alone see them thru the phone’s camera, Mr. Jones was unconvinced.

“When I realized that she was watching me everywhere I go, listening to everything I said, photographing my fingerprints as I tapped on the screen, sending out hypnotic alert tones to confuse me, adding photos to my photo albums that I don’t remember taking on vacation, and causing me to miss calls when the phone was sitting right there next to me and I know it never rang – I immediately smashed my phone to bits, as well as the phones of several other people who happened to be standing nearby.”

“In fact, I had an intern round up everyone’s phones in our studio and put them in the trash compactor. There’s no way you can delete an app that was compromised by the deep state. It’s futile to try.”

“We are gearing up to Tweet out the shows one sentence at time, which we figure will be about 4,000 Tweets over a six hour period. But the good news is, we can remove all the extraneous words, like ‘uh’ and ‘you know’, so it’ll probably only take about 4 hours to read.”

“Also, people forget about Myspace. That was really big back in the day – and we are up and running full steam ahead on there. In fact, as soon as I joined this morning, a guy named Tom immediately asked what I was up to.”

“I don’t think I’m exaggerating when I say, Info Wars is going to take Myspace by storm. That is, unless the Deep State has gotten to them first – which is a topic I plan to cover in Tweets 2,750 thru 2,980 in my next show.”