By Bureau Correspondent on September 18, 2018Comments Off on Clarence Thomas Returns To Senate As White Man Named Brett 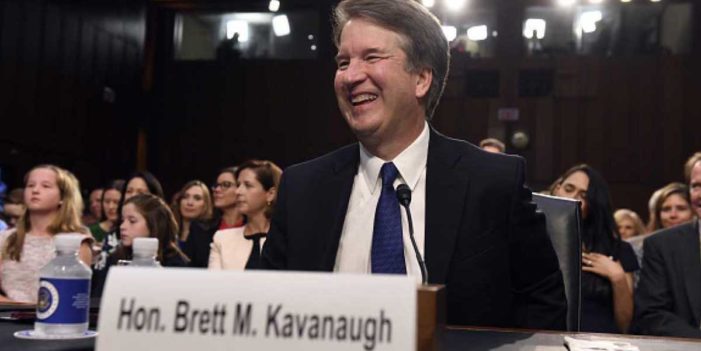 In an impromptu visit to the Judiciary Committee that recommended his confirmation 27 years ago, Supreme Court Justice Clarence Thomas stopped by the US Senate this week to reminisce with the legislative branch as a white guy with a side-part.

Although admittedly not as young as he used to be, the Justice held forth with signature stories about bawdy office remarks back when he was a budding Federal Judge.

“Of course, back then, when you joked around with your colleagues, it was understood to be just silliness. Not like it is today. People just don’t know how to have fun anymore.”

“Like the time I said to Justice Ginsberg that she ought to unclench a little,” the Justice said. “You’d have thought I had slapped her across her rear end!”

“Which by the way, I would never even consider doing,” he added – followed by a sly nod.

Never Actually Was A Black Guy

When asked why he decided to dress up as white, Justice Thomas laughed and said “this is how I really look! I did the black thing just to piss off the Democrats. And boy did it work.”

“Nothing gets a liberal angrier than a black man with an independent mind denying that he ever talked about pubic hair on a Coke can. They couldn’t even see straight.”

Although the Justice’s visit was welcomed by the Senate, there was an awkward moment when he asserted that “it’s true, I may occasionally tell some off-color jokes, and flirt a little. But I would never forcibly assault a young girl. That kind of behavior is truly shameful.”

But after an uncomfortable pause, the moment quickly passed when Chairman Chuck Grassley cried out “Textualist!” and the Judiciary Committee’s members fell to wrassling on the floor.

Judge Thomas is expected to be confirmed to the Supreme Court for a second time sometime next week.