By Bureau Correspondent on February 24, 2019Comments Off on Ebay Scam: Trump Trades US Nuclear Warhead For Fake Nobel Peace Prize 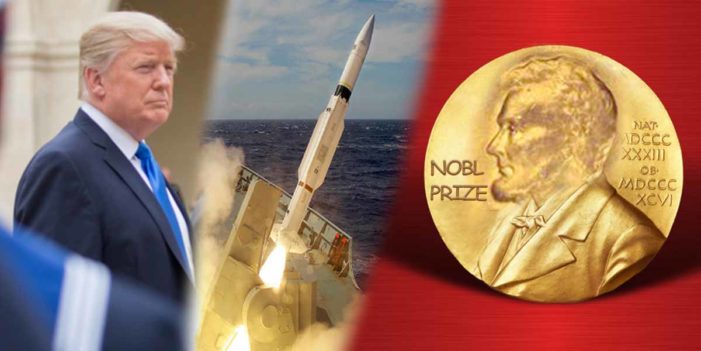 In a hoax that proved even the President of the United States can be taken for a ride, the US military delivered a nuclear warhead Tuesday to an undisclosed location in Southeast Asia and exchanged it for a Nobel Peace prize which later turned out to be a forgery.

The Peace Prize, a modified oversized replica of a Lincoln penny with the words “NOBL PRIZE” printed in a corner of the coin, was exchanged for the warhead in a remote jungle region.

After reportedly seeing the fake prize offered on Ebay late one night for 10 million dollars, the president had his staff contact the seller who proposed a trade. Over the strenuous objections of the 4 branches of the armed forces, the president ordered the ICBM missile to be prepared for transport.

“There is only one peace prize made every year, so it’s much more valuable than a nuclear weapon,” said the president, unbothered by the weapon having possibly fallen into the hands of terrorists. “We can always make another nuke – you can’t make a Nobel Prize.”

Sources inside the White House say the president contacted Ebay for a full refund, but was unsuccessful as he failed to click the “buy insurance” button when he made the purchase.