By Bureau Correspondent on May 14, 2019Comments Off on President Enacts 100% Tariffs On All Countries Everywhere 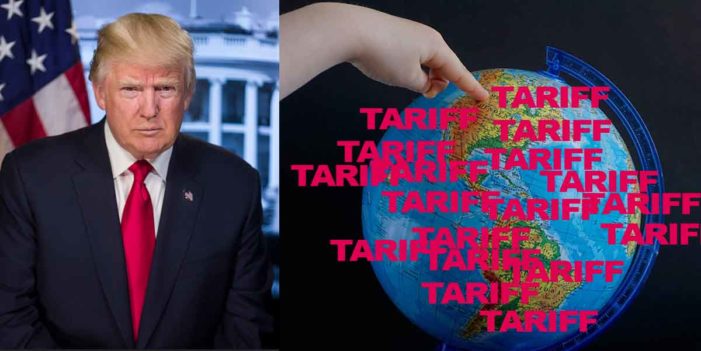 Declaring you can never have too much of a good thing, President Trump today announced he will be enacting 100% tariffs on all goods and materials imported from any country, regardless of what the product is, what it’s used for, or where it came from.

“For years, we have suffered from terrible trade deals where other countries have been able to sell their goods to Americans with ZERO tariffs,” the president said, forming a circle with his thumb and forefinger. “Today we will right this terrible wrong.”

“From now on, beautiful tariffs of 100% on all goods entering the United States by land, by sea, by air, and also those intercepted by Space Force, will be collected by my administration,” the president relayed to a stunned gathering of American CEOs, who thought they were attending a birthday dinner for Treasury Secretary Steve Mnuchin.

The sweeping tariffs, which the president said will apply to items as diverse as “taco salad bowl shells,” “Chinese checker games,” and “CD-ROM drives” will be effective immediately.

While executives in the crowd tabulated the impact of doubling costs for imported materials and the prices they will need to charge consumers, the president went on to say he would be raising tariffs to 300% in the near future, with a goal of reaching 1000% tariffs by June of 2020.

Tariffs on American-manufactured goods were also being considered.