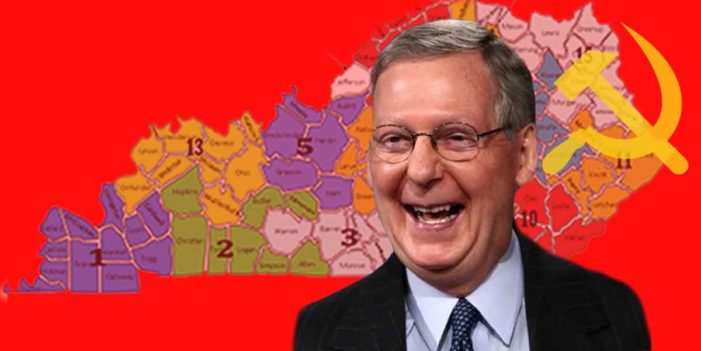 Consumed by spasms of hysterical laughter that bordered on insanity, a Russian spy today finally confessed to being an operative of a foreign government before declaring it didn’t matter who knew, because he was still going to win re-election to the US Senate.

The revelation, which came amid repeated chortles and diabolical snickering, brought a sense of futile resignation to those who heard the confession.

“It’s tough to stop a super villain who not only tells you what their plot is, but then taunts you to do something about it,” said Greg Menderthal of Parcville, Kentucky. “If I knew how to run for US Senate and put a halt to his plans, I definitely would, but I don’t have the money.”

“So, I guess he’s going to continue his evil ways,” he said shrugging.

The Russian operative and Kentucky senator, who goes by the Nom de Guerre “Mitch McConnell”, made a point of asking each person in the room how they were going to stop him from winning the next election – after which he broke into uncontrolled laughter while enlisting his henchmen to laugh along with him.

“I get that he’s an evil mastermind and will someday destroy the planet earth,” said Mr. Menderthal, “but did he have to take it to that level? A simple confession would have been enough. Jeez.”

While federal authorities scrambled to respond at press time, word of the spy’s Russian background had reportedly already netted him an increase of 10 percent in popularity among eligible voters, and an invitation to speak at the next Republican state convention.