Bruce Springsteen Shuts Down US Government, Returns Land To Indians

By Bureau Correspondent on September 7, 2019Comments Off on Bruce Springsteen Shuts Down US Government, Returns Land To Indians 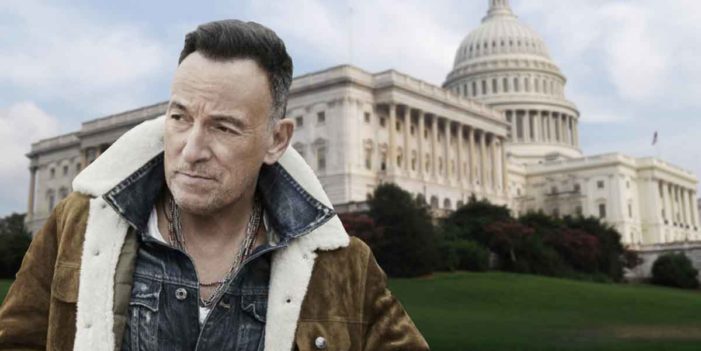 Frustrated by his country’s inability to get on anything resembling a path to common decency despite decades of effort, singer-songwriter and national treasure Bruce Springsteen used a little known clause in the US Constitution Tuesday to dissolve the United States government, and return the land to its indigenous peoples.

“Obviously this has all been a very big mistake,” said the disappointed recording artist and winner of 23 Grammy Awards as he watched congress file out of the US Capitol. “But sometimes it’s better to just move on and start over.”

“Take care, boys!” he called out to a couple senators who were looking for a bus stop carrying bankers boxes filled with their belongings. “You’ll find something!”

The clause to disband the federal government, buried deep in Article XIX of the nation’s founding document, gives express consent to:

“An American of exceptional popularity and great moral authority to suspend the constitution in times of need should the government fall into the wrong hands.”

“The founding fathers, in their great wisdom, obviously had some inkling that it might be necessary to pull the plug on things,” said historian and law professor Panos Minklinos from The University of Reno. “Bruce Springsteen is obviously the kind of person they had in mind if things got out of hand.”

In a ceremony on what was previously called the National Mall, land formerly controlled by the US government was ceded to Chief Mark Powatansa of the local Nacotchtank tribe who accepted it from Mr. Springsteen on behalf of the 573 Indian Nations.

President Trump, who originally barricaded himself in the West Wing refusing to leave, decided to depart after being confronted by a group of Americans including Buzz Aldrin, Reba McEntire and the great Willie Mays.

“Oh well,” he added, looking off into the distance, “there’s always Greenland.”