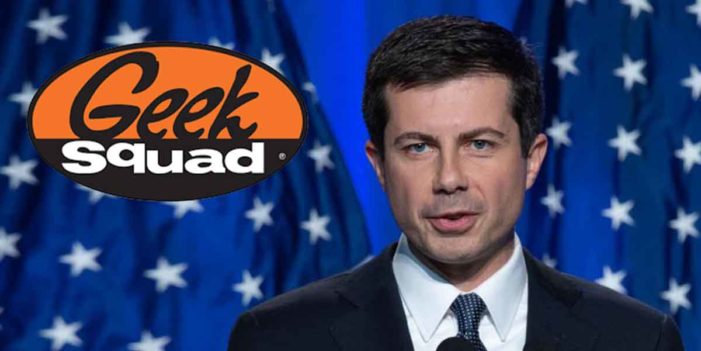 Responding to repeated demands to release a list of his formerly anonymous clients while working at a US consulting firm, presidential candidate Pete Buttigieg today admitted he not only worked for multinational consumer electronics corporation Best Buy, but was, in fact, an agent plotting the takeover of the US government on behalf of the company’s tech support group Geek Squad.

“I am ashamed to admit that the rumors are unfortunately true,” the former mayor of South Bend, Indiana, told a crowd of journalists outside the 7th circuit federal district court building where he was being indicted on espionage charges. “My candidacy has been a thinly veiled ruse to establish the Best Buy Geek Squad as the de facto ruling party of the United States of America. And for this, I am truly, deeply, sorry.”

Although it has referred to its customer service representatives as “Counter Intelligence Agents” for years, the poorly understood Geek Squad, a subsidiary of Best Buy headquartered in Richfield, Minnesota, was thought to be focused on repairing home computers for its customers.

“Obviously we have a lot of work to do to find out what exactly this Geek Squad is up to,” said National Security Advisor Robert O’Brien in a closed door briefing for members of the Senate Intelligence Committee.

“The fact that an American citizen could come this close to assuming the most powerful position in the free world, while working at the exclusive direction of shadowy organization which was abetting his candidacy using computers, is a chilling reminder that the United States must be ever vigilant against tampering in our elections.”

“We’re just lucky we caught this in time,” said Mr. O’Brien. “There’s no telling what could have happened had such a person actually been elected president.”