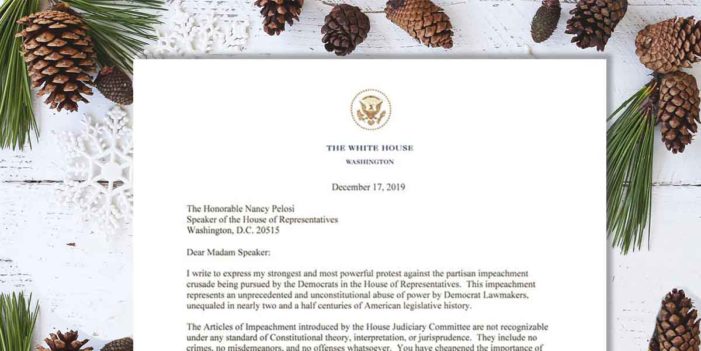 In a gesture carrying all the joy of the holiday season, President Trump this week extended his warmest wishes to Congress in a six-page letter addressed to Speaker of the House Nancy Pelosi.

Penned as he sat by a roaring fire in the Lincoln Bedroom of the White House, the letter showered hard-working lawmakers with his fervent wishes for a successful year legislating on behalf of the people of the United States of America:

By proceeding with your invalid impeachment, you are violating your oaths of office, you are breaking your allegiance to the Constitution, and you are declaring open war on American Democracy.

Continuing the tradition of presidents past in bestowing on his fellow government servants good tidings at this joyous time of year, the president affirmed the unbreakable bonds to his fellow countrymen and women who carry in their hearts the same undying love for their nation.

…more due process was afforded to those accused in the Salem Witch Trials.

Celebrating the values of the season, and in that spirit of gratitude that honors all the men and women who work tirelessly for their constituents back home, as well as the families that stand by them, the president thanked the Congress for their service in no uncertain terms.

There is nothing I would rather do than stop referring to your party as the Do-Nothing Democrats.