By Bureau Correspondent on January 17, 2020Comments Off on Ken Starr Opens New Investigation Into President Trump And Monica Lewinsky 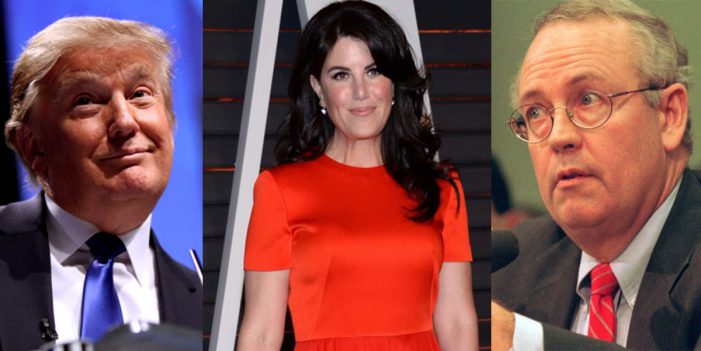 In a sudden move that has sent the Trump administration reeling, former Baylor University President and Solicitor General Kenneth Starr announced today he was re-opening a decades old investigation to look into whether there has been any improper contact involving President Donald Trump, and the fashion designer and television personality Monica Lewinsky.

While the former prosecutor said he was not able to comment on an ongoing investigation, sources say that the new inquiry will focus on what contact Donald Trump has had with Miss Lewinsky, what he has said under oath about his contact with her, and whether there are any dresses being hidden by either party.

Marcellus Greenlam, Professor of Law at the Syracuse School for Judicial Studies, outlined what he believes will be the keys to the new investigation:

“Starr will also be checking various cigar stores in the area, to see if President Trump has purchased any cigars, and if so, what has he done with them? And, of course, it’s important that he uncover a signature phrase that is grammatically confusing. Something like “what is is?” or a similar catchphrase.”

“America is hungry for another investigation into an ex-intern at the White House,” said Mr. Greenlam. “We have not had an intern-slash-president scandal for almost 30 years, and this is not acceptable on any level.”

While Ms. Lewinsky was not available for comment, Omarosa Manigault, former political aide to President Trump, said she believes Mr. Starr will deliver the goods this time. “I don’t know what happened back in the 90’s, but I think this time he will send someone to jail. At least for a little while. Maybe it’ll be Trump, or someone else – I don’t really care who, to be honest. It’s just that someone should be held accountable for something.”

The investigation will have plenty of financial backing, since the original funding request was never officially closed by the Congressional Budget Office. “We chose not to close the original probe back in the 1990s,” said House Speaker Nancy Pelosi, “out of an abundance of caution in the eventuality of just this type of threat to democracy arising again.”

Congressional hearings have been scheduled to run from now until the the 4th of July, and will preempt all other programming on cable news networks – unless of course something better comes along.