By Bureau Correspondent on January 18, 2020Comments Off on Gloves Found By Dershowitz At Scene Of Ukraine Call Too Big For President’s Hands 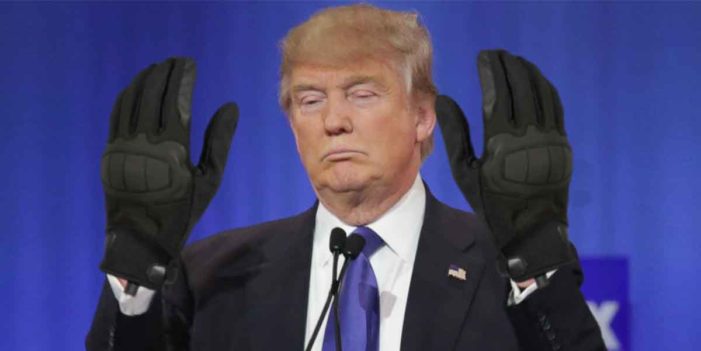 After a careful search of the scene where President Trump allegedly made a phone call to the Ukrainian president asking him for political favors, Attorney Alan Dershowitz announced Friday he had discovered a pair of gloves where the president was alleged to be sitting during the call in question.

The gloves, to the shock of impeachment trial watchers who had gathered at a press conference outside the Senate, dwarfed the president’s hands as he stood demonstrating, holding them aloft in the air for all to see.

An audible ‘gasp’ could be heard from the crowd as the president allowed his hands to drop to his sides and they saw the gloves slide off his arms and fall to the floor, making a soft thud as they hit.

No Way Those Gloves Are His

“Those are way too big for his hands,” said trial-watcher Abby Driscoller after the demonstration – “I don’t see how they could possibly have been his. They would fall off every time he wore them.”

The gloves, made from premium black carpincho leather with buttons along the side, were found by Mr. Dershowitz after a careful examination of the conference room where the president makes calls to foreign leaders.

“I have learned from past experiences that many times clues at the scene are missed by detectives in the hubbub of securing the area, dealing with reporters, and taking pictures,” said the 81 year-old lawyer. “Things like gloves, hatchets, and bottles of poison can escape notice if they roll up under a sofa, or have some leaves piled on them. You need to look under everything.”

“For instance, in this case I noticed the chairs in the conference room have rollers on them. As I looked down at one chair near the head of the table where the phone is, I saw that it had rolled up on this pair of gloves,” Mr. Dershowitz said, holding them up for examination.

“The detectives who investigated the call must have missed them, since they were kind of hidden under the base of the chair. It’s amazing what you can find when you know where to look.”

Obviously Could Not Have Been There

“They are definitely the kind of gloves that you could see the president wearing,” said Ms. Driscoller. “They have a nice grain pattern that gives them a sporty look – I could see him buying them.”

“But, obviously it must have been someone else making that call to the Ukrainian president,” she concluded, “because there is no way President Trump could have ever dialed that number had he been wearing these.”

While the impeachment trial is ongoing, sources say that the Senate will likely move soon to acquit the president of all charges in light of the new evidence. A vote is expected to take place just as soon as Fox News finishes airing the video of the gloves 1,000 times.