Trump Team Rests Their Case In Senate: We Know They Are But What Are We?

By Bureau Correspondent on January 25, 2020Comments Off on Trump Team Rests Their Case In Senate: We Know They Are But What Are We? 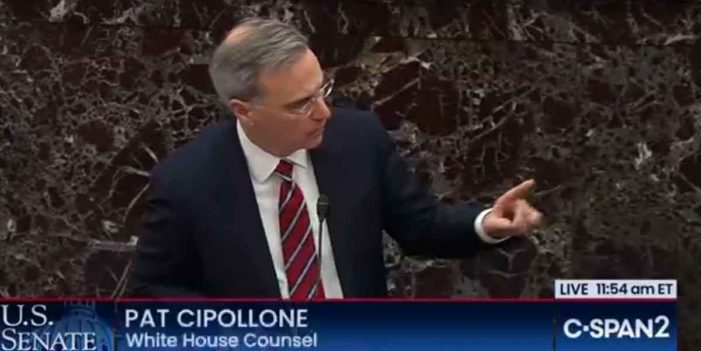 In a long-anticipated presentation in the Senate Chamber on Saturday, President Trump’s impeachment defense team finally made their case, explaining that they have known all along who the House Managers were that brought over the impeachment articles, but asked the members to consider: “who exactly are we?”

“We know who the people are who came over from the House of Representatives,” said one of the team’s deputies, Patrick Philbin. “We watched them walk across the rotunda and walk in here and deliver the articles. But can anyone tells us who we are?” he asked.

“For instance, who is Jay Sekulow? Or Pat Cipollone? Perhaps you know who Alan Dershowitz is, but what about Mike Purpura? Can anyone tell us who that is?” Mr. Philbin questioned.

“And why is my name Philbin? Isn’t that Regis’ name?” he asked.

Too Many Questions To Be Answered

As the team’s queries reverberated around the chamber, Senators considered other legal theories put forth by the Trump team.

“If you don’t know who we are,” said Attorney Sekulow, “I ask you, what does any of this mean? Am I really here talking into this microphone? Are you sure that this is the Senate Chamber – or are you home in bed about to roll over and turn off the alarm clock?”

Prosecutors also laid out other topics for the Senators to ponder:

While legal analyst Nozora Rafelko said it was unclear how the Trump defense team would wrap up the many lines of questioning in their final summation, she said it has given the Senators a lot to think about.

“While these tactics may not address the actual evidence presented, or refute the arguments to convict the president, they are confusing and may cause some members to fall asleep and miss the vote,” said Ms. Rafelko.

And although the outcome remains to be seen, the president’s defense team was keeping busy. As the lead attorneys made their case on the floor, other members were busy requesting a tape measure to prepare evidence that their office was definitely way smaller than the other team’s – and would be submitting a 52-page legal brief questioning why they got the bigger office space and not us.