By Bureau Correspondent on February 4, 2020Comments Off on President Introduces Mideast Plans For Gaza Strip Club 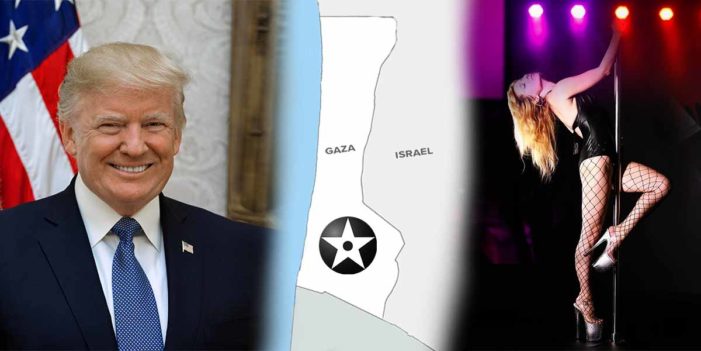 Applying his diplomatic skills to solve one of the most intractable problems of the last one hundred years, President Trump today announced he will convene a special joint task force to open a gentleman’s club in the occupied territory of the Gaza Strip.

“I don’t know why this was not done a long time ago,” the president tweeted as he made the announcement. “It’s a NO-BRAINER!”

Will Pay For Itself

Saying the lack of a Gaza Strip club was another example of the Obama administration’s failure to provide quality options for adult entertainment, the president outlined his plans.

“The club will be constructed using tax increment financing, which I can tell you is how all buildings are financed.”

“Israel will allow for the club to be built and in return will be given free passes for weekdays AND weekends,” he said. “Meanwhile the Palestinians will get to keep all the proceeds from liquor sales. It’s a win-win-win all the way around.”

Only The Best Dancers

While Gaza is currently being administered by Hamas, a militant Islamic political party that shuns alcohol and nudity, the president was confident that the club will bring together two sides that have disagreed for decades.

“The first meeting between the Palestinians and the Israelis will go down as one of the best in the bible. They’re gonna get along perfect,” he promised. “No one can be in a bad mood at a strip club. There’s too much beauty in there.”

To allay any concerns, the president promised the club would be very tasteful. “They will have only the best Arab and Jewish dancers – and believe me, there are some great, very hot dancers in that region that will drive you meshugenah.”

As of press time, the president was busy planning the grand opening of the club featuring an appearance by the Victoria Secret angels. The exact date is still to be determined, but will be either Rosh Hashanah or Ramadan, whichever comes first.