By Bureau Correspondent on February 5, 2020Comments Off on Trump Admits Country Is Now Perfect During SOTU, Will Retire From Politics 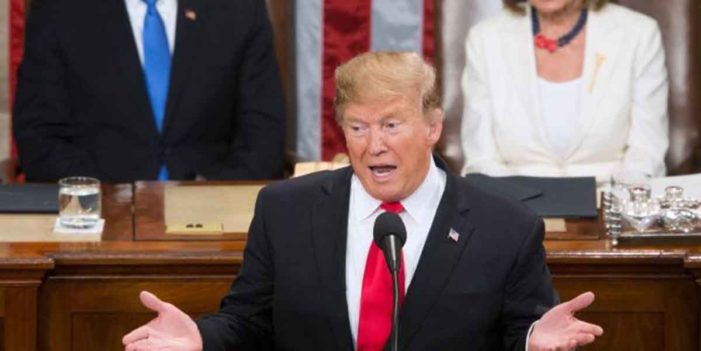 Saying the evidence is overwhelming that after three years of his presidency, the country has been perfected, President Trump surprised Congress at his State of the Union Speech by saying he must now retire, since there is nothing left for him to improve.

“There is so much more unity now than from when I started,” he mused, “and everyone is so much richer and better looking. Also, space has been conquered by my new Space Force. And Americans are much safer now than ever before,” he continued.

“I know that this will come as a shock to many Americans, but since I have perfected the country, it makes no sense for me to continue to be president,” the president said.

Listing accomplishment after accomplishment over the course of the two-plus hour speech, the president read from a litany of achievements including finding a cure for cancer, reversing the effects of old age, victory at the Battle of the Bulge, cloning a human for the first time, and setting a world record for the bench press.

“For most presidents, what I do in just a week would take them a year to do – no two years,” he said. “It’s like if OJ Simpson was combined with a NASA rocket scientist. That’s what it’s like to be me. It’s amazing.”

“I’ve done so much that there’s really nothing left for anyone to do,” he said wistfully.

As he left the House Chambers at the conclusion of his speech to thunderous applause, President Trump paused to acknowledge the crowd who had come to see him, and bid them a good night.

“Thank you all for witnessing my greatness,” he said. “Without you to watch what I’ve accomplished, it would just be me, and that would just not be as good. Because as you all know, I already know how great I am.”