Jesus Returns To Earth, Finally Avenges Himself On The Onion

By Bureau Correspondent on January 8, 2018Comments Off on Jesus Returns To Earth, Finally Avenges Himself On The Onion 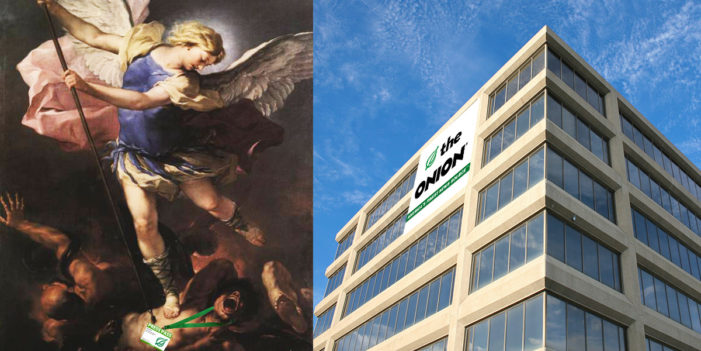 Vowing to mete out punishment to those responsible for what he called “a pestilence for the ages,” Jesus returned to the earth Monday to smite the editorial board, writers and support staff of satirical news source “The Onion”.

Displaying a fury normally associated with the Old Testament, the usually peaceful Jesus was in no mood to make amends with a media company that has mocked him repeatedly over the years.

“Today the wicked will feel the wrath of God my Father, and all the archangels who have been so sorely abused by this blasphemous buffoonery,” said Jesus.

Although not a complete surprise to the Onion staff, many employees thought it was unfair of Jesus to single them out.

“Obviously there are a lot of parties he could have smote first,” said copywriter Andrew Jonsonn as he hurriedly loaded provisions into the trunk of his Ford Taurus in the Onion parking lot. “There’s ISIS, of course. And the companies polluting the earth. And dictators around the globe -” he said, pausing as a lightning bolt whistled over his head and exploded his car’s antenna.

“For Christ’s sake, I just bought this!” Mr. Jonsonn yelled.

A Long Litany Of Affronts

While there have been many stories that incurred his ire, the Lord cited “New Evidence Reveals Christ Lounged In Tomb For Extra Hour Before Finally Rising From Grave” and “Time Capsule Discovered In Rear End Of Jesus Statue,” as being particularly egregious.

“As Lord of the Universe, I possess a perfect sense of humor,” said Jesus as he vaporized a Xerox machine in the company break room. “But these Philistines are even less funny now than when they began filling the world with their filth.”

“I am doing creation a favor by smiting them.”

Promising to annihilate the “fabricators of untruths” at the flagship Onion first, Jesus said he would also obliterate the writers of Click Hole “and the many other sundry profaners against God and nature in the various subsidiaries of this heinous abomination”.

The editorial staff, unreachable in their underground lair located a mile beneath the city of Madison, Wisconsin, had no comment. However, a spokesperson referred callers to the company homepage where a list of “Top 10 Jams Jesus Listens To When He’s Stoned” was posted.