By Bureau Correspondent on October 16, 2018Comments Off on Mars Perseverance Rover Finds Newspaper Warning Of Dire Effects Of Climate Change 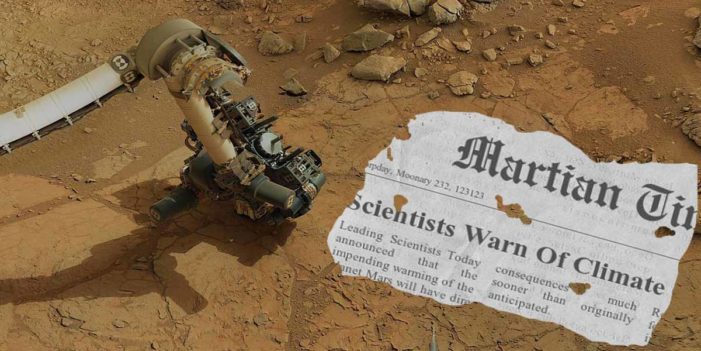 Scientists at NASA’s Jet Propulsion Lab this week announced the historic discovery by the rover Perseverance of a newspaper clipping on Mars, proving that intelligent life once inhabited the red planet.

The article, which detailed dire warnings of climate change that would soon engulf Mars in a hellish dust storm wiping out all life, was uncovered as the rover began its mission searching for evidence of ancient microbial forms.

“The good news,” said Professor Rolf Abelson, Head of the JPL Mars Geological Survey Team, “is that our species on Earth can be comforted by the fact that other living beings inhabited our own solar system in the not so distant past, geologically speaking.”

“The bad news,” he continued, “is that apparently, we are freakin’ toast.”

The scientists quoted in the article said it was likely too late to prevent the coming catastrophe, as CO2 emissions were already heating the planet beyond the point of no return.

“As the Martian permafrost continues to warm, huge amounts of methane gas will be released into the atmosphere,” said the news story, describing a doomsday scenario some theorists believe could occur on Earth.

“All living things will perish in a matter of months as the air temperature rises to 198 degrees and the blanket of atmosphere around Mars floats off into space. There is no escape. We are all doomed.”

A disgraced former Leader of Mars, also quoted in the article, said there was no evidence the permafrost was warming, and that the scientists were trying to make him look bad.

“Climate change is a hoax invented by the Glorbocrats to stop our Gleebula factories from increasing their production of Plubonium.”

“There is absolutely no evidence and nothing to worry about,” the ex-Martian Leader said. “Plubonium production is going thru the roof, and you’re going to see a lot of great things happening. We are going to make Glurb like you’ve never seen. And also, Zormanium. Zormanium is going to be off the charts.”

While scientists on Earth were still determining how the fate of Mars relates to Earth’s climate change, early consensus is that all of humanity will likely perish within 25 years, based on the timeline in the article. “Or possibly less,” said Professor Abelson. “Depending on whether the US Administration decides to authorize the production of Glurb.”

A vote on Glurb is scheduled for this coming Tuesday in Congress.