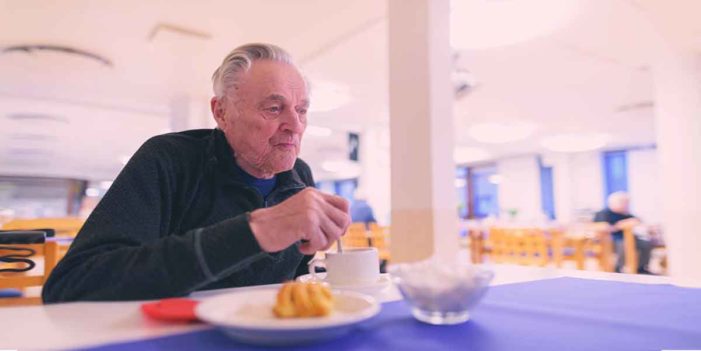 Declaring that a deadly coronavirus outbreak is no excuse for flavorless eggs and pasty half-cooked bacon, well-known food critic Walter Paerce released a stinging three-page diatribe this week, excoriating the cafeteria of St. Ebenezar’s Hospital in Lower Manhattan’s Tribeca neighborhood for what he called “a crime against humanity worse than any mother nature could dish out.”

With restaurants closed in the city, and needing to fill his weekly column, Mr. Paerce decided to give the nearby venue a try.

“I’ve walked by this hospital and seen people in the windows doing what looked like eating for years, so I made the abyssmal mistake of thinking there would be actual food in here,” said the reviewer, without disguising an expression of utter disgust.

While acknowledging the difficulties in attracting a top chef to a basement venue near an industrial laundry, several dishes drew particular ire from the well-known foodie:

Fiesta Taco Salad: “An affront to the Mexican people. It should immediately be taken up by the UN Security Council as a flagrant act of terrorism.”

Three Cheese Macaroni: “There is nothing ‘natural’ at all about this natural-aged cheddar – if a cow had anything to do with this menu item, believe me, it didn’t involve the udder.”

Vegetable Medley “A tuneless disaster – the food equivalent of listening to a banjo being run thru a wood chipper.”

Chinese Chopped Salad: “Watching the staff behind the counter combine the harmless ingredients of this dish was like watching Sweeney Todd, but without the music and singing.”

Fire-Grilled Chicken Sandwich: “A better use of ‘fire’ here would be as a word shouted by the commander of a firing squad.”

If He Had A Time Machine

An unsparing critic of even the best restaurants in Manhattan, Mr. Paerce pulled no punches on the cafeteria’s signature paninis:

“If I had a time machine and could send one of these so-called sandwiches back to Neil Armstrong to show what the future in America would hold, he would have gunned the Eagle into the side of a lunar mountain and run into the night screaming without a space suit.”

Vowing never to return to the hospital food service location, Mr. Paerce finished his meal by drawing a giant red “X” thru a comment card on the table, validating his parking, and proceeding to the nearest exit.

“If this is what we have left to eat in this country,” he said to a man placing trays of dirty dishes on a conveyor belt as he departed, “for God’s sake, please, give me the virus.”