Man Forgives Basketball Hoop That Taunted Him As A Child

By Bureau Correspondent on March 16, 2018Comments Off on Man Forgives Basketball Hoop That Taunted Him As A Child 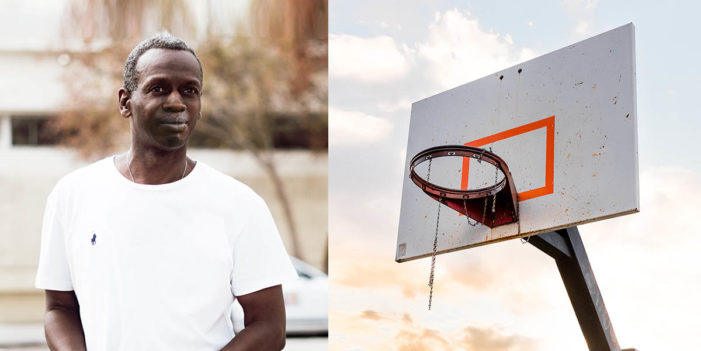 Errole Sanders has fond memories of his childhood growing up in the Fort Greene area of Brooklyn. And among his favorite recollections are the pickup basketball games with his friends at a nearby park that would last until after dark, when their mothers would call them home for dinner and to do their homework.

However, as with many children growing up, Mr. Sanders did experience some bullying in his neighborhood – specifically, by the hoop on the northwest corner of the playground which relentlessly taunted him during his days playing on the blacktop courts.

“I can remember the first time. I was driving down the lane for a shot, and I heard the hoop say something about my shoes looking like they were left out in the rain. It was an easy lay-up, but the comment made me miss because my shoes were looking a little ratty at the time. And back then what you were wearing was a big part of your self-esteem.”

Apparently emboldened after Mr. Sanders missed, the hoop continued to taunt and verbally harass the impressionable youngster for the rest of the afternoon, and beyond.

“It wasn’t everyday that the hoop would taunt me – sometimes it would just kind of sit there and judge my dribbling, or throw out random comments about how ugly someone’s grandma was, or what kind of shorts I was wearing.”

Rain Or Shine, The Taunting Continued

“It got to the point for a little while that I would just go home if my friends moved to that hoop to play. I just couldn’t take the constant chatter – calling every shot a ‘brick’, or asking if my barber used a seeing-eye dog to hold the clippers. It was tough to concentrate.”

Standing Up To The Hoop

Knowing that bullies at school tend to back down when confronted, Mr. Sanders decided he had to stand up to the hoop if he was going to keep playing ball with his friends.

“It was rainy that day – so the courts were empty. And I decided I was going to keep shooting on that hoop until the comments stopped. The first shots were free throws and the hoop was throwing everything it had at me: your momma jokes, talking about my socks, you name it. Then after about a half hour, the hoop got kind of tired. The insults slowed down to just one or two word phrases. And by the time an hour passed, the hoop just gave up I guess.”

Ever since that day, the feisty playground fixture remained quiet when Mr. Sanders was playing. “I don’t know if the hoop had a change of heart, or if it just realized that it didn’t have that power over me that it once had. Either way, I’ve moved on – and don’t hold any hard feelings against the hoop. We had a lot of good games shooting through it,” said Mr. Sanders remembering the good times.

The hoop, which has survived for 39 years on the same playground backboard, declined to comment on the offer of forgiveness by Mr. Sanders. However, it was definitely thinking that there was no way he was ever going to make the next shot.