Star-Crossed: He Wanted To Keep His Nuclears, I Needed More Space Force

By Bureau Correspondent on March 3, 2019Comments Off on Star-Crossed: He Wanted To Keep His Nuclears, I Needed More Space Force 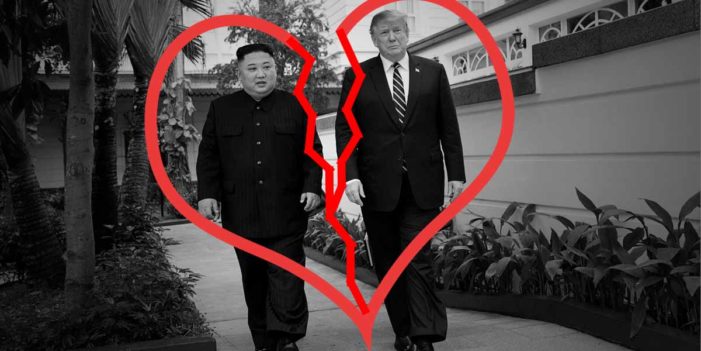 This winter I went on a trip to Vietnam that I had planned recently, without the help of anyone else.

I thought it would warm up a friendship I started months before after this person and I hit it off bigly. But SAD! it didn’t happen. I was ready for real commitment, but he couldn’t let go of his past relationship with his nuclears, and that was a fact I just could not live with.

Many of my friends told me not to go on this trip, but I went anyway because I did not believe this person would let me down. FAKE NEWS! I was let down in a yuuuge way. He not only wanted to have his nuclears, but when I said I would ease up on some pre-conditions to our relationship, he told me he didn’t even care.

I used to call him my little rocket man, but now I don’t know what to think. After we talked for a couple hours, we decided that we didn’t even want lunch, so I cancelled the reservation. And I didn’t even care that I had already paid for it.

We agreed to part ways. He said he would write me and that we could still be friends, but I don’t know. I am in another relationship with someone who lives in Russia and he is always asking me to do things. Who knew love could be so complicated?

It sounds like you are really hurting, but this is probably for the best. If you had been meant to be together, rocket man would have made the effort to meet you halfway.

Better to move on and spend time with your Russian friend – it sounds like he’s someone who really cares for you!