Man Trapped In Airplane Seat Monitor: “My Life Is A Living Hell” 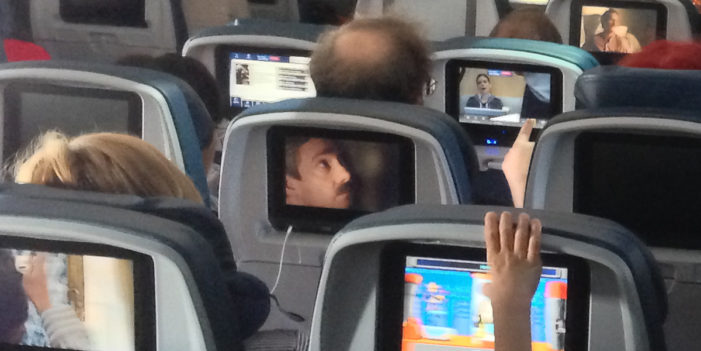 It’s no secret that the airlines have been shrinking the size of passenger seats for years, but for one man, the result has proven disastrous.

Brian Middlehouse had just manage to wedge himself into his seat on a recent flight as the cabin crew began their final prep for takeoff, when he realized something had gone horribly wrong.

Kind Of Leaped Into It

“I’m what you would call a bigger guy,” said Mr. Middlehouse, speaking from inside an LCD monitor in row 14 of an Airbus A320. “Over the years it seemed like every time I flew on an airplane, my knees had less and less room. And then one flight, I realized they were literally pressed up against the seat in front of me, and it’s gotten worse every year since then.”

“So, I was prepared for squeezing into a tiny seat when I boarded that day. But the space was so small, I had to kind of take a deep breath and leap into it. It was after I came to a rest and went to reach for my seat belt that I knew something was terribly wrong.”

Mr. Middlehouse’s entire body had been somehow been squeezed inside the video screen facing his seat, and he found himself suddenly staring out from a strange new world.

“I was looking directly at my empty seat on the airplane, which didn’t make any sense. So, I went to push the call button to alert the flight attendant, but my hands couldn’t reach any farther than the edge of the monitor. That’s when I really started freaking out.”

Life Inside A Monitor

“I started screaming of course, because nothing like that had ever happened to me. Then a flight attendant came over and explained that this happens occasionally on the newer planes and there was nothing to worry about. Well, that made me scream even louder, so she just turned down the volume on my monitor until I calmed down.”

Mr. MiddleHouse spent the next few weeks flying around in an airplane TV screen staring at the people who happened to be assigned to his seat. “It’s really depressing. Every day I am staring at multiple people who are A, very pissed off that they can’t watch “Game of Thrones” because I’m stuck on the screen. And B, super bummed about how small their seat is, and about flying in general.”

“As a guy trapped in an LCD screen, I’m practically suicidal anyway. But staring all day at the crazed eyes of people who are trapped in these tiny seats and would rather be anywhere else in the world than here – well, you get the picture.”

Unsure How Long It Will Last

Although the airline did not know how long the condition would last for Mr. Middlehouse, they did offer him a 5,000 mile frequent flyer bonus once he was free from the TV.

“I guess I’ll try to take advantage of that once I get out of here”, said Mr. Middlehouse as the plane pulled away from the gate on Thursday. “I mean, this has been the worst experience of my entire life, but I guess I could use the miles. So, you know, all things considered, it could be worse.”

One Response to "Man Trapped In Airplane Seat Monitor: “My Life Is A Living Hell”"