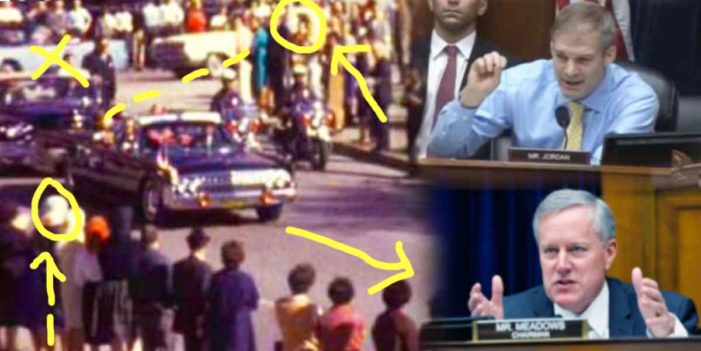 Looking forward to presenting their case after weeks of closed-door impeachment proceedings against President Trump, House Republicans expressed confidence Tuesday that the evidence they’ve gathered will prove beyond a shadow of a doubt that Hunter Biden was not only in Dallas on November 22, 1963, but that he fired the fateful shots that killed President John F. Kennedy.

Handing reporters grainy photographs with yellow circles and arrows, along with numerous printed pages obtained from the internet, Republican lawmakers assured the press that Hunter Biden, who wasn’t born until 7 years after the famous assassination, pulled the trigger.

“The fact that we’re talking about impeaching the president while this cold-blooded assassin is roaming free, perhaps looking for his next victim at this very moment, is an outrage,” said Representative Jim Jordan of Ohio. “Have we no laws in this country?”

Working from intel placed in a shoe box by President Trump’s legal team, Republicans have carefully retraced the steps of Hunter Biden, placing him in the vicinity at the moment President Kennedy’s motorcade passed by.

“Several witnesses have Tweeted they saw Hunter Biden wandering around the grassy knoll with a shotgun that day, asking what time the president would be there,” said Representative Mark Meadows. “And yet here we are on this witch hunt which is preventing President Trump from focusing on what he should be doing – arresting Hunter Biden for the murder of a US President.”

Although most of the people present during the tragic event are no longer living, sources say new testimony will be presented at the impeachment proceedings, including several eyewitness accounts obtained by President Trump’s lawyer Rudy Guiliani during a recent trip to Slovenia.